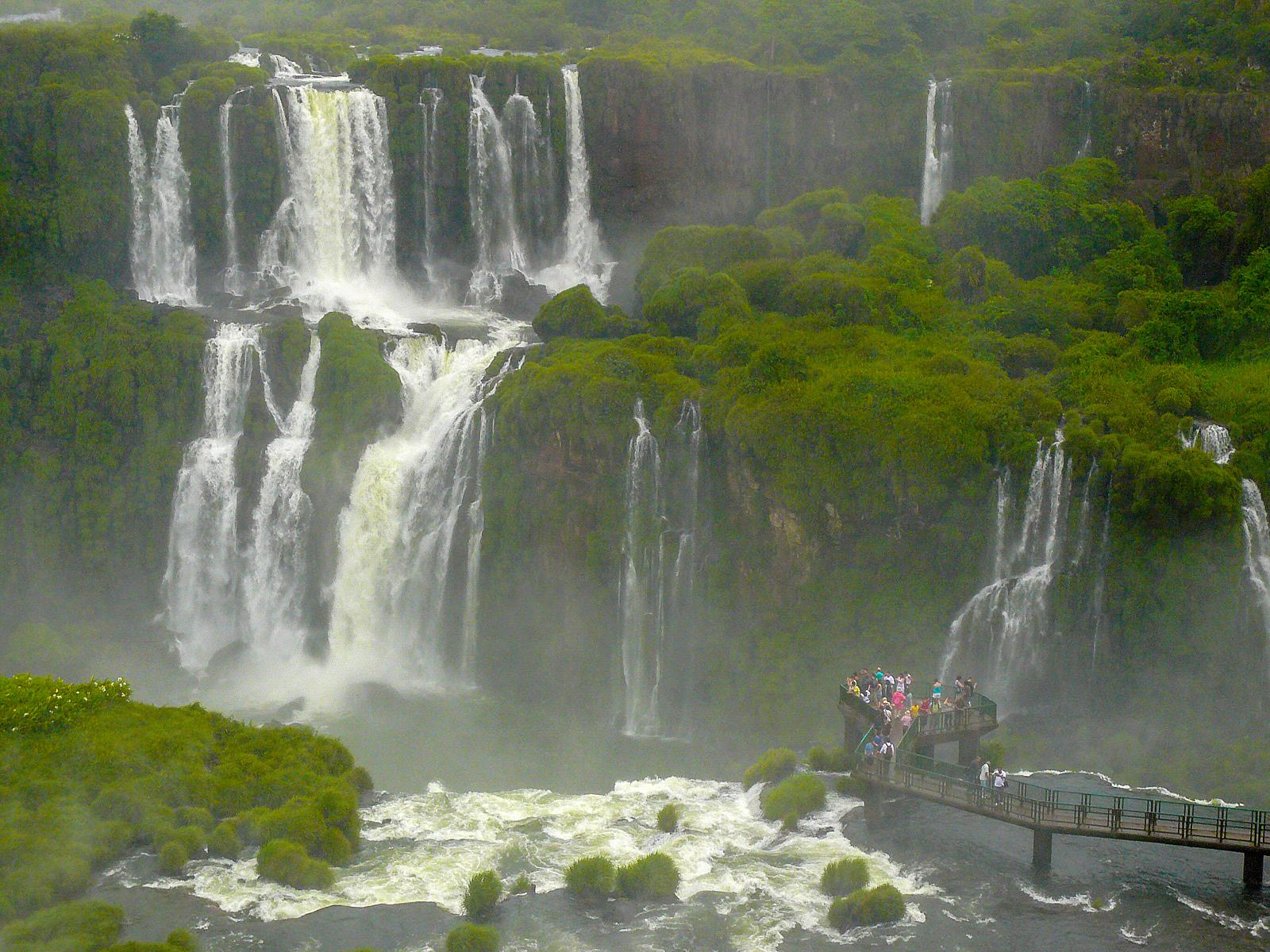 Getting across the Argentinian border was more time consuming than planned, but without incident. Our bus driver left while we were getting our Brazilian exit stamps, so we had to wait about 30 minutes for the next bus from the same company. I would recommend you just pay another R$4 for the very next bus, even if it’s a different company. The weather was bad that Wednesday, so once I got to the hostel I took it pretty easy. I did walk out to the point where Rio Paraná and Rio Iguazu meet. From this three-pointed junction, you can see Brazil, Argentina, and Paraguay. 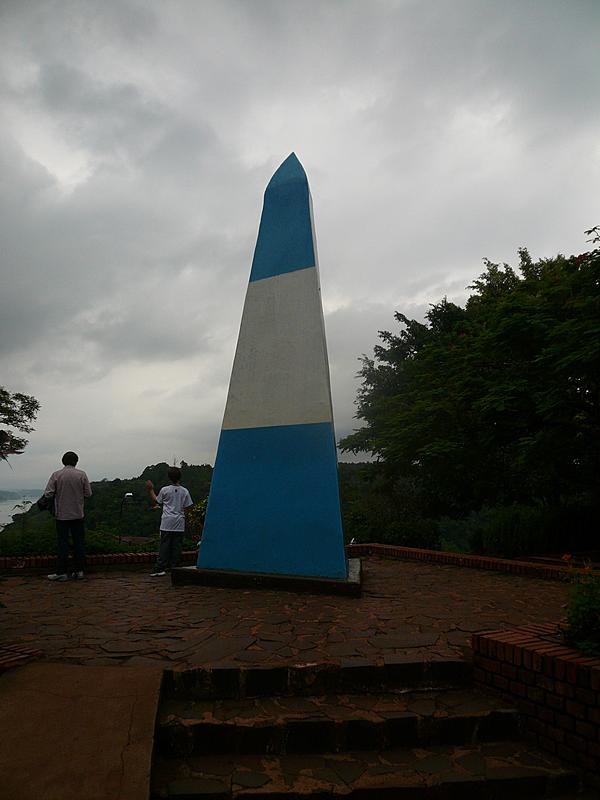 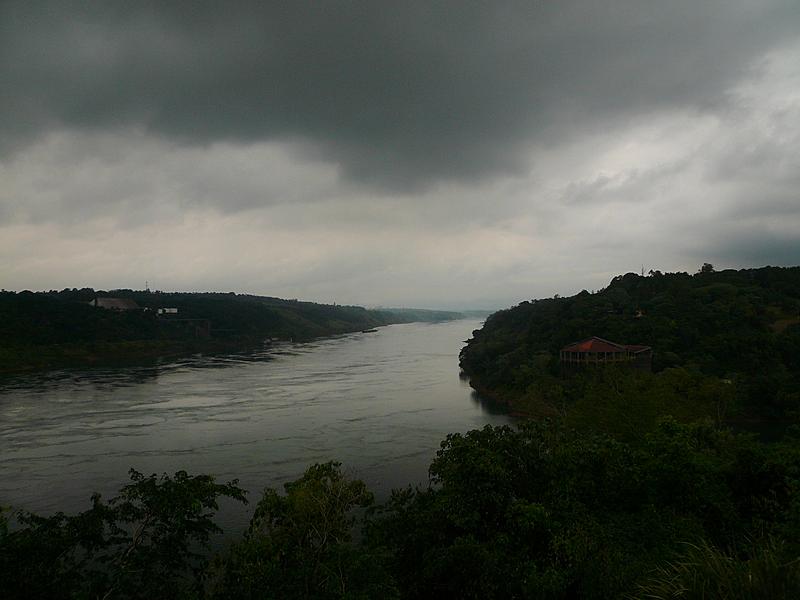 The next day at the Puerto Iguazú bus station is where small-continent syndrome really started hitting. As I was boarding the bus, I ran into Reggie, one of my favorite people I had partied with in Buenos Aires. He had just arrived and was on his way to the hostel. Unfortunately, with only email and Facebook as methods of communication, we were never able to meet up again. This was after I had run into Bernard whom I had also partied with in BA at the Cristo in Rio de Janeiro.

Once at the park, I opted not to hop on the train, as the line looked like an amusement park. There’s only one track, so the train only comes and goes every 20-30 minutes. After walking through the pleasant jungle-lined Sendero Verde I saw the falls once again. Where the Brazil side gave wonderful panoramic views, the Argentinian side gets you up close and intimate with the falls. 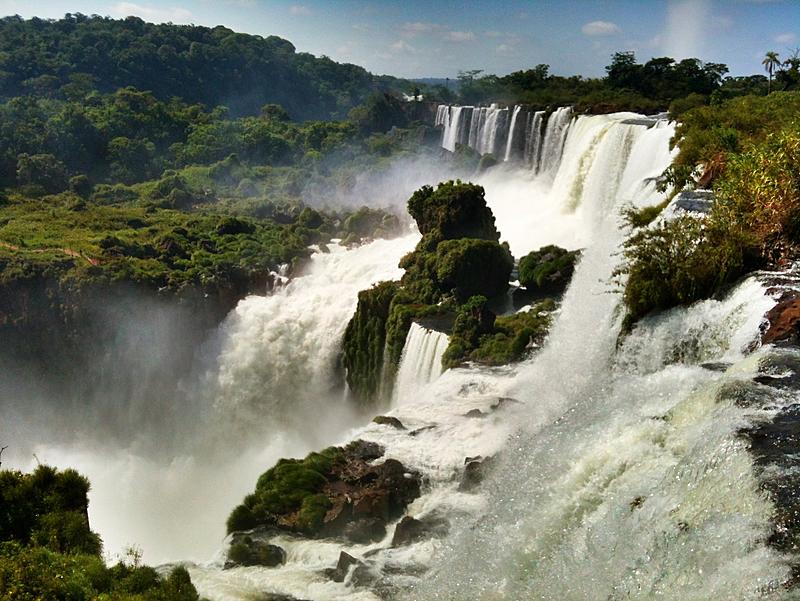 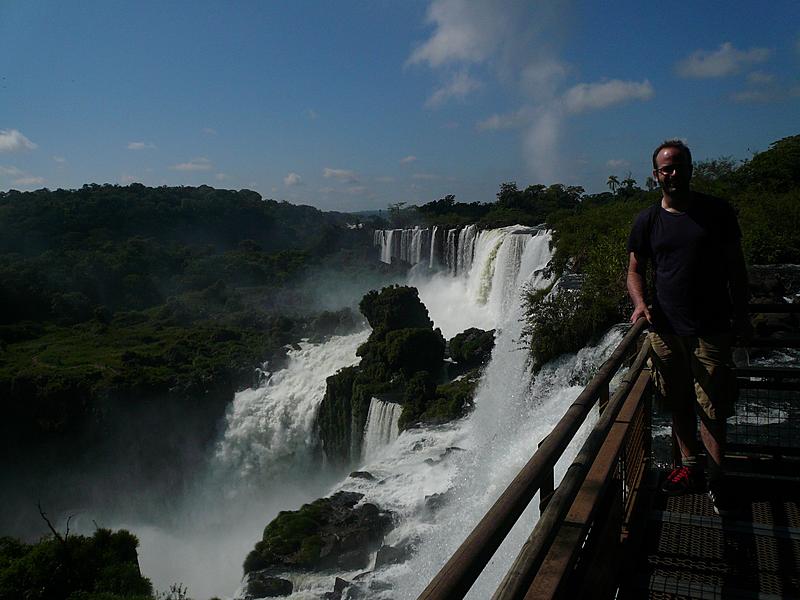 And by intimate, I mean it gets you wet. Really wet. </sexjoke> Especially when you take one of the jetboats which bring you right under the falls. I had brought my bathing suit, but once we happened upon the jetboat entrance, there was nowhere convenient to change, so I just went in the shorts I was wearing. I then later changed into my swimmers to dry off. 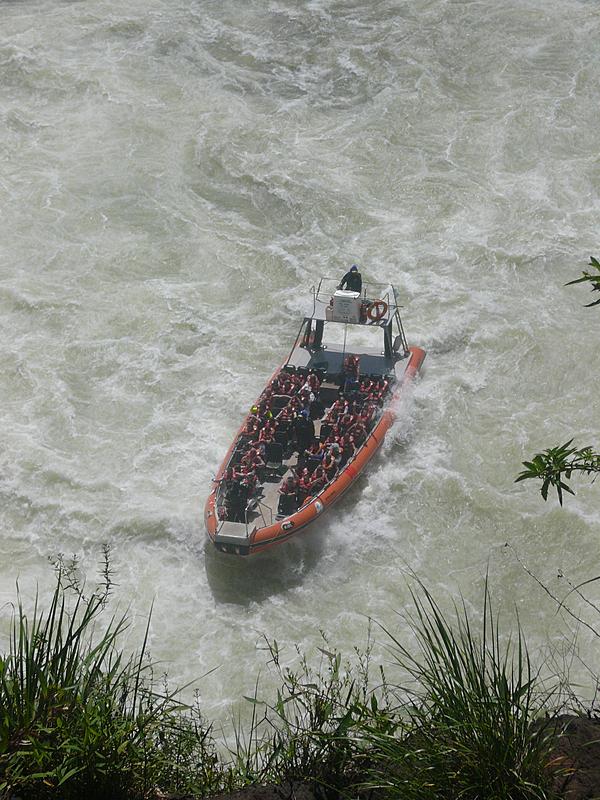 And this is when I ran into Kurt and Rachael from Hawaii again. I had first met them at the Boca Juniors match in BA. They later in the day convinced me to go find the swimming hole with them and their Danish friends Nanna and Annelie. This led to a much longer hike than initially planned, but was worth it to be able to swim and hang out under a small waterfall. (The water is coming down so fast it’s slightly painful). 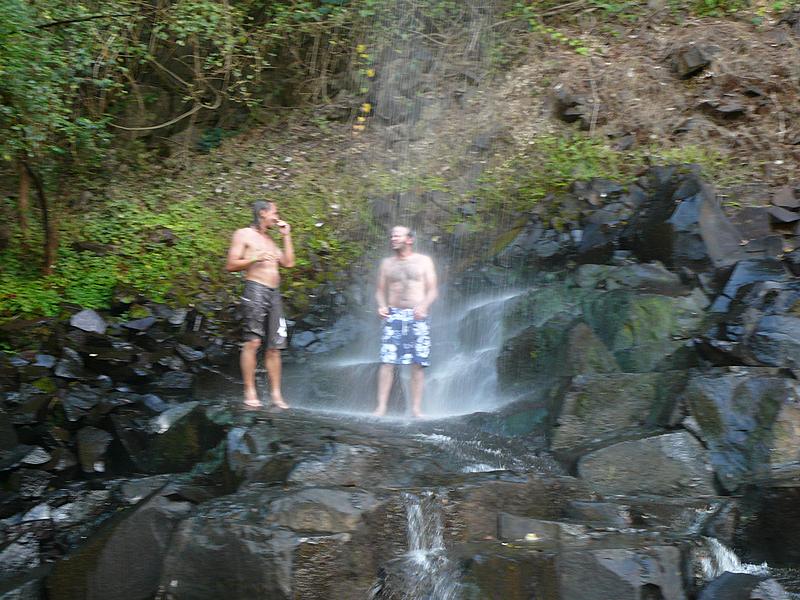 We got a little lost coming back from the Sendero Macuco. The rest of the crew was in a rush to get back to the entrance to catch their bus, so we ended up hitching a ride on a bus that drove by. Somehow we had gotten outside the park. Fortunately I was able to use my limited Spanish to explain my situation and gain reentry. Unfortunately by this point I had missed the last train to Garganta del Diablo, the giant falls that can only be reached via the train.

And here is what I had missed the first day, La Garganta del Diablo (Devil’s Throat)

It was also good that I returned because the previous day San Martín island was closed. It’s a short boat ride, then a very steep ascent, but the views are absolutely worth the trouble. 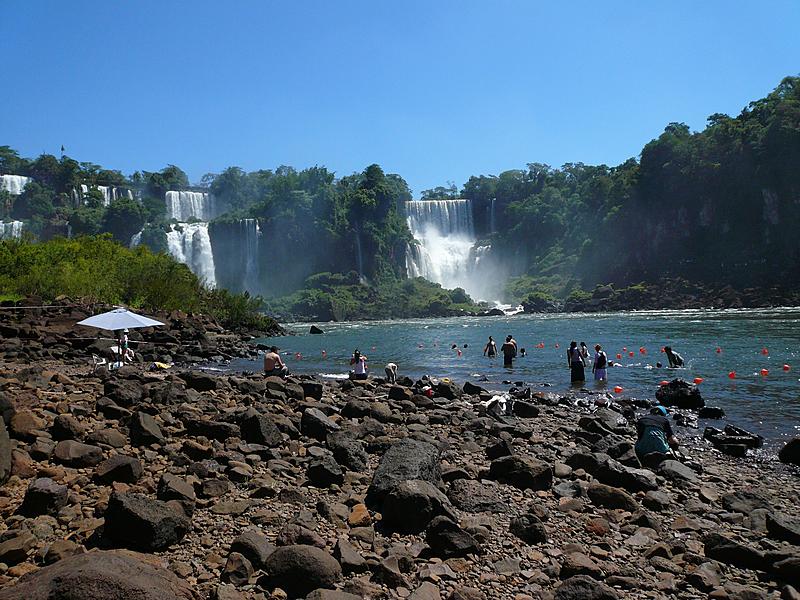 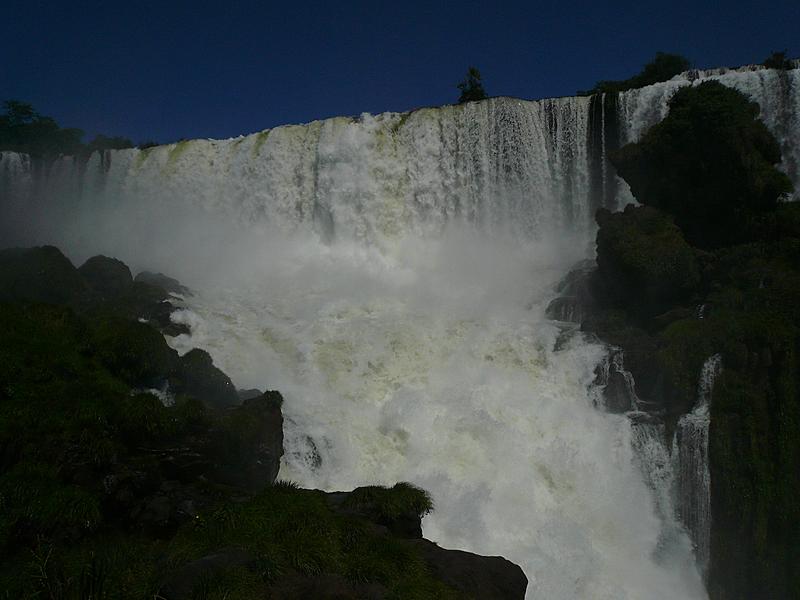 For my final full night in Argentina, I went out for a final bife de lomo and some wine. I thought I was just ordering a half bottle of wine, but it came out as a full bottle. By the time I had finished my steak, I was a little wine-drunk and plenty meat-drunk so I offered the remainder of my wine to the table of Parisians next to me. I then proceed to hang out with them for the rest of the evening. To complete my small-world tales (for now), I posted this picture on Facebook not realizing that I had taken a picture of these fine French folk even before I had met them. 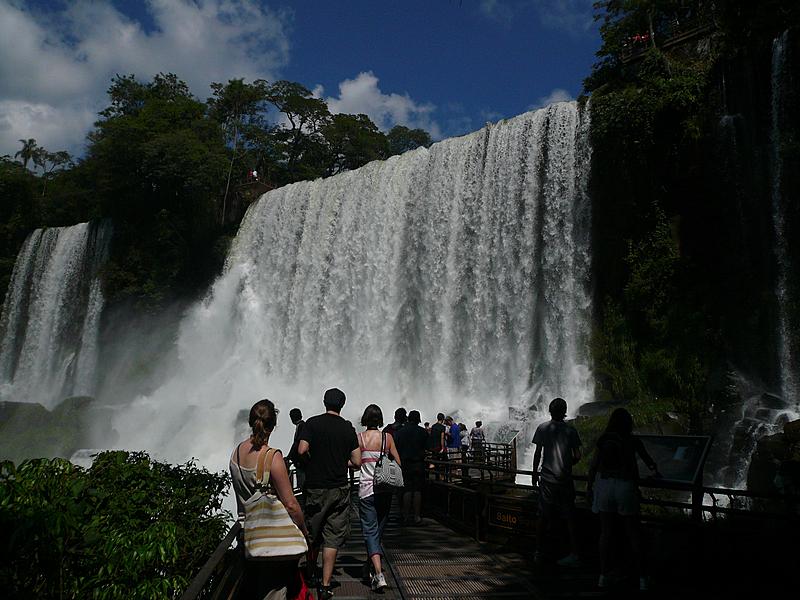