You had me at Western Style

So I started this post in Japan, but never got around to finishing it. And now it’s two weeks since I’ve been home, and there are certain things I miss. I’m not sure if this is one of them…

I apologize in advance for the graphic nature of this post, but it’s something about Japan that merits mentioning.

First off, I would like to applaud Japan for their abundant and free public toilets. You’ll find them in almost every train station and any tourist area. Now, they probably won’t have soap, and more than likely won’t have toilet paper, but at least they’re there. And if you wander around the streets, more than likely someone will hand you what at first appears to be a normal, quarter-sheet flyer. Normally you ignore them, because they’re handing you flyers to the strip club. But not this guy! He’s handing out packets of toilet paper with ads on it! You don’t have to pay 100yen to buy some from the vending machine.

Now, there’s two types of toilets you’ll encounter in Japan. There’s our standard western style toilet. You know and love it: every house, restaurant, and store outside of Japan has one. Then there’s the Japanese-style squatter.

Now there’s a custom in Japan that you take off your shoes when you enter a house or temple. Sometimes they’ll provide you slippers to wear around. But there’s a special set of slippers for using the toilet. If you’re at a hostel or someplace with a shared bathroom, you’ll notice them sitting by the water closet door. You can’t really call it a bathroom, because the Japanese always separate the toilet room and the shower/bath room. 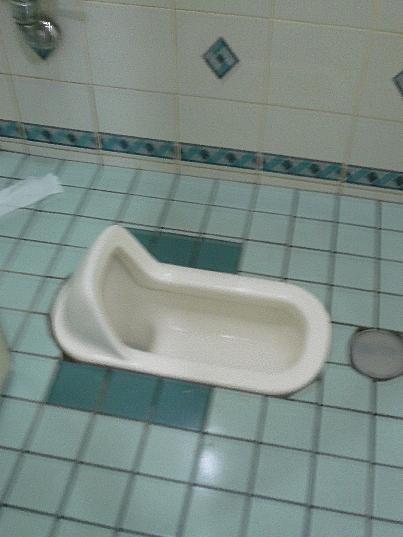 At first I didn’t understand this custom. But as I encountered more and more Japanese style toilets, I began to understand why. I’ve never seen where more people have missed the toilet more. And I’ve been to Indiana. And I’m not talking number one here.

Luckily many places, especially the bigger train stations and hotels, will have at least one western style toilet. But these aren’t your American Standard standard toilets. These are the 2 hours of extra footage Special Editions with hours of bonus features. Oh yes, these toilets have “bonus features.”

They’re the most advanced defecation disposal devices known to man. It’s cold in the morning. Luckily the seat is heated. I never saw this, but supposedly the girls’ toilets have a button that will start playing music/ocean sounds to mask the sound of what you’re doing. When you sit down, it’s like you’re commanding the Starship Enterprise with the control panel you have beside you. (the Klingon and Uranus jokes are too tempting).

And this is one of the simpler ones: 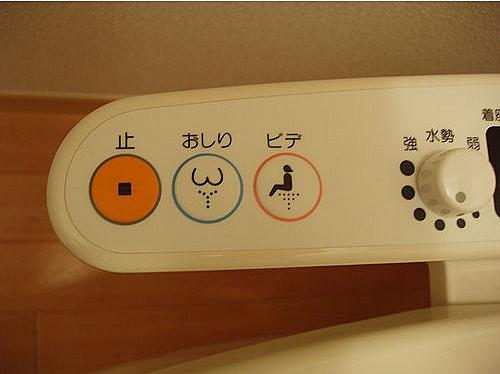 For a good time, push the blue button. You can guess what it is. Just remember, the orange button means “stop.” Tell them Jason sent you, it’s an experience you won’t soon forget.