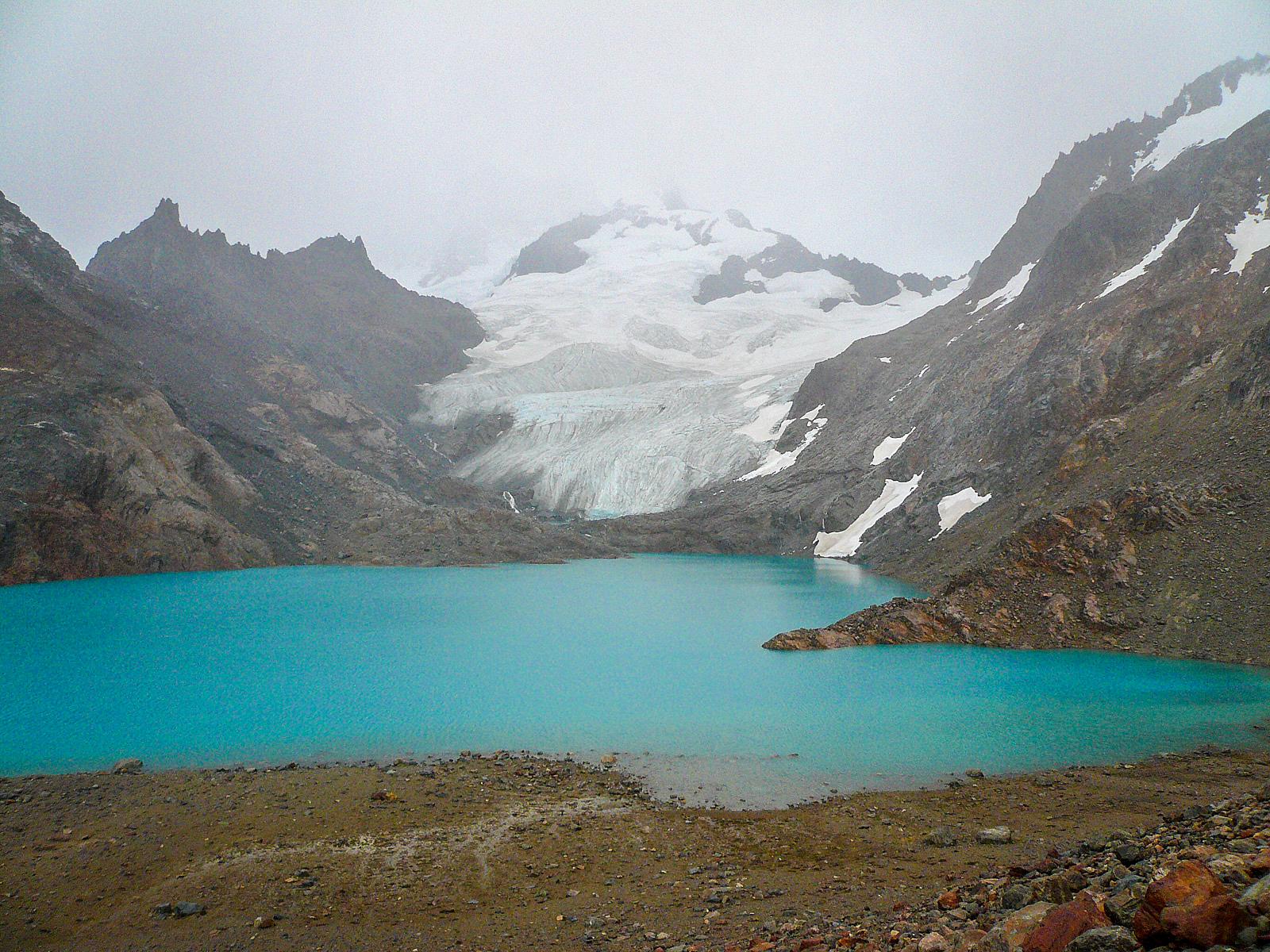 A Storm of Swear Words

El Chaltén — aka Hippyville, Argentina (we seriously saw a hippy playing bagpipes for money on the street), aka Howdothestoresnothavecrispstown– is the starting point for many a supposedly wonderful hike. We had just climbed straight up a wall made of ice, a little hiking should be no problem. We woke up on Thursday morning with a grand plan of a twelve hour trek including both Laguna de los Tres and Laguna Torre. We packed our lunch and started out on the trail. It was a cooler morning, slightly overcast. As we began, a slight drizzle began coming and going. Victoria and I were determined, so we pushed on. The sun constantly teased us, peaking out from behind the clouds for 10 minutes. I still don’t quite understand this, but there were moments were it was both sunny and raining at the same time.

We were greeted by several quite pleasant rainbows. It was the just before St. Patrick’s day, but I’m not sure the leprechauns hang out in Argentina, so our pot of gold was not to be found. 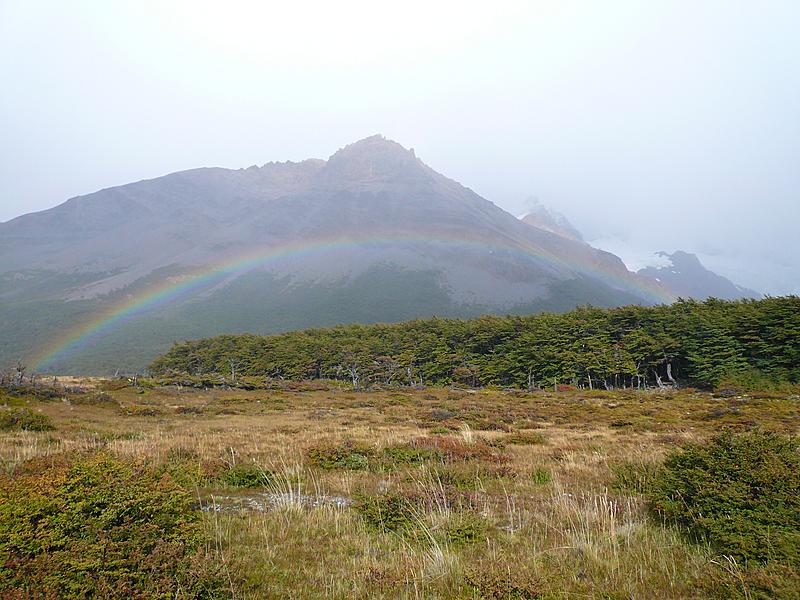 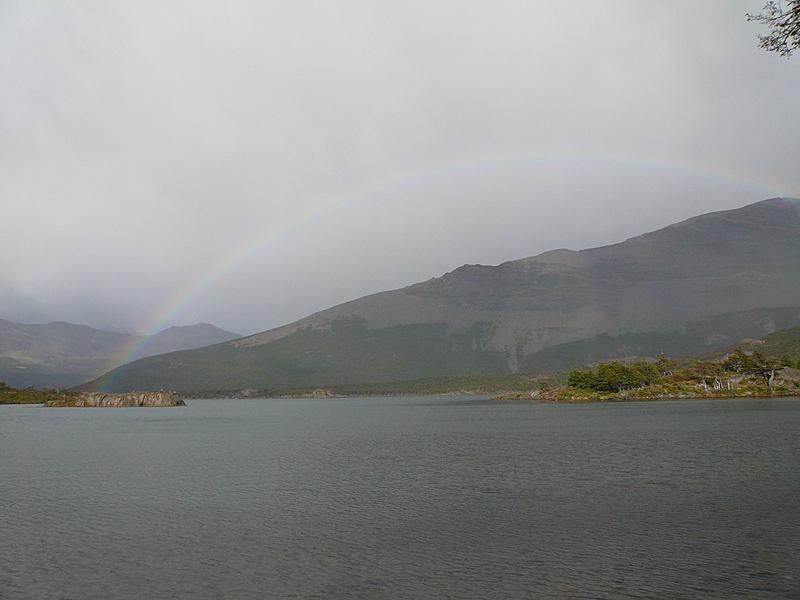 After about 4 hours of hiking we reached the shelter before the ascent to Laguna de los Tres. The rain had grown heavier, but we had made it that far so we had no choice but to power through. It was about two hours up a nearly forty-five degree incline. Wetter and wetter we became. I didn’t wear waterproof pants and the rain had soaked through my pants into my long underwear. My legs were surprisingly not that cold: it was like wearing a wetsuit.

We cursed our friends back home in Chicago with their 70 degree sunshine. It wasn’t supposed to be like this. I had come to South America to escape the Chicago winter, and instead we were hiking in a a trifecta of rain, wind, and snow while Chicago lounged on the beach in March.

At the top we were greeted by a tremendous view of Laguna de los Tres, a small lake in the middle of the mountains, a small glacier slowly approaching the edge of the lake. 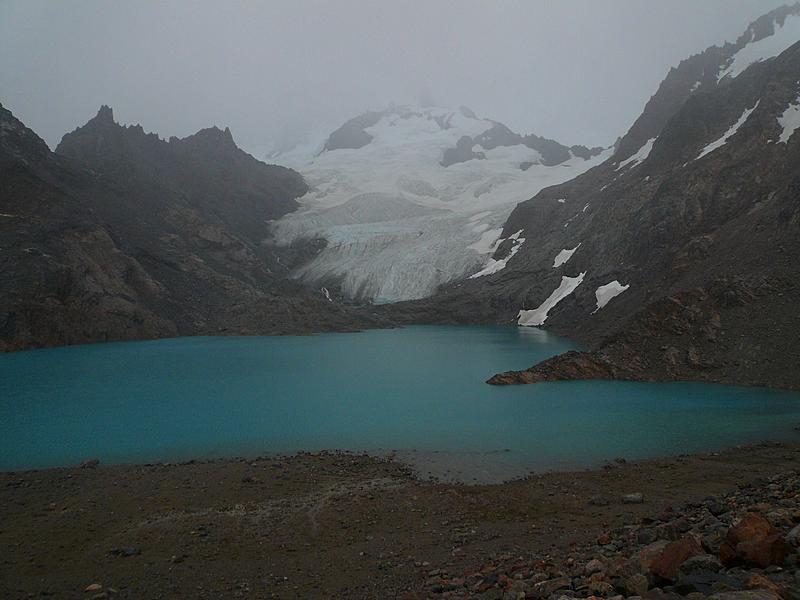 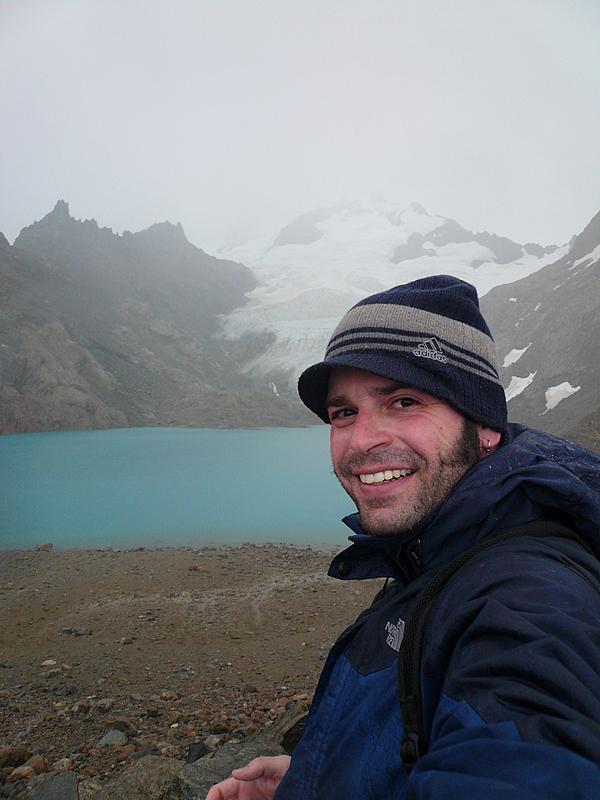 Unfortunately, an icy wintery mix was falling, the wind was blowing, and the fog hung over many of the mountains so we didn’t hang out up top for long. The trek down was steep and arduous. By the time we reached the bottom my knees felt like jelly, the moisture in my long underwear had seeped down into my socks. The squishiness in my boots made the way down feel even longer.

We ate a quick bite and continued on our way. A part of me still wanted to try to make it to Laguna Torre, but my wet feet quickly dissuaded me that another 6 hours of hiking would be far too uncomfortable. We did take the long way home, and the sun finally escaped from behind the clouds, and the temperature gre quite pleasant, but it was not enough.

Somehow El Chaltén had gotten farther away. As we crossed hill after hill Victoria and I were convinced that the town had up and disappeared in our absence. After a total of about eight hours of hiking we finally made our way home. We stopped for dinner at the wonderful Fonda Ahonikenk restaraunt (I highly recommend it to anyone staying in El Chaltén). There we discovered the best way to serve wine: out of a penguin-shaped decanter. The wine flows straight from the penguin’s mouth. I truly hope Victoria can find them in Buenos Aires when she returns there, because the joy they brought her dissolved much of our stress from the previous hours. 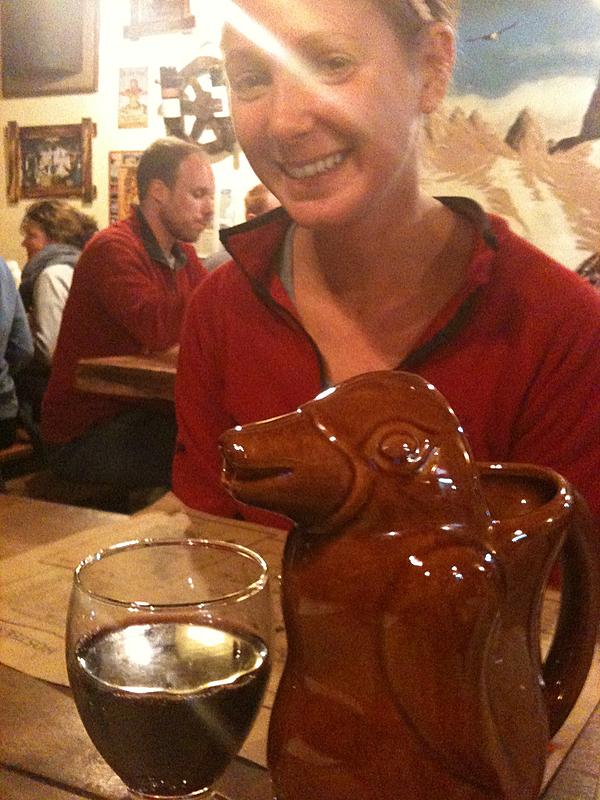